Kingdom Hearts would like for you to remember that it exists too, thank you very much, and that its iOS and Android prequel, Kingdom Hearts Unchained χ, will be available on April 7 in North America. Tetsuya Nomura, former director of Final Fantasy XV during its stint as Versus XIII, is helming the mobile title in addition to his duties on Kingdom Hearts III and Final Fantasy VII Remake. Kingdom Hearts Unchained χ is a prequel to the entire series, taking place long before the enigmatic Keyblade War that is referenced frequently throughout the current canon. It released on iOS and Android in Japan last September and via web browser in 2013, featuring an art style reminiscent of Theatrythm.

In a post at the Square Enix blog, Nomura remarked:

I would love for people who have not yet played KINGDOM HEARTS to take this opportunity to casually jump right in with a blank slate. And of course for our fans, you can approach and play this KINGDOM HEARTS in any way you like, so through collecting medals of your favorite characters, collecting costumes, and moreover becoming a part of the KINGDOM HEARTS world and experiencing the enjoyment of weaving your own story that leads to one of the biggest mysteries in the series, which is the “Keyblade War,” I hope you can further enjoy the upcoming release of KINGDOM HEARTS Ⅱ.8 and KINGDOM HEARTS Ⅲ, as well as the KINGDOM HEARTS that will continue beyond that.

Tetsuya Nomura seems to be making a concerted effort to renew his credibility in the wake of the success that Final Fantasy XV found in other hands. Kingdom Hearts HD 2.8 Final Prologue is due out this year and, when combined with Kingdom Hearts Unchained χ, seems to establish a pretty clear roadmap to Kingdom Hearts III.

Boycott Kingdom Hearts until they stop using ridiculous names. Nomura should be punched in the throat. 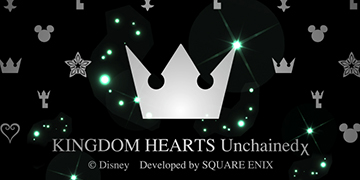 
There are no related articles...