Square Enix and Buena Vista Games have announced many of the voice actors for the North American version of Kingdom Hearts II. The trio of main characters, Sora, Riku, and Kairi, are played by Hayley Joel Osment, David Gallagher, and Hayden Panettiere, respectively. Jesse McCartney will take over the role of Roxas, while Brittany Snow will voice the mysterious Namine.

Christopher Lee, from the Lord of the Rings films, will lend his vocals to Diz, and Steve Burton will become Cloud. The females of Final Fantasy VII, Tifa and Aerith, will be voiced by Rachael Leigh Cook and Mena Suvari.

A couple of big-name celebrities will return to their roles from the films. Ming-Na will be playing Mulan, James Woods will be back as the diabolical Hades, and Zack Braff will see the sky falling as Chicken Little. 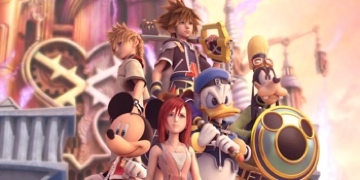 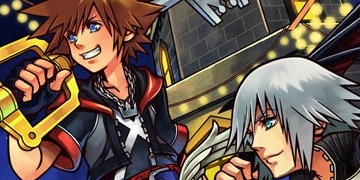 Square Enix has posted an online survey where they ask fans of the Kingdom Hearts series for feedback on the franchise as well as what they would like to see included in future releases. The survey also includes questions about which gaming systems you own (they forgot to add the PSP and PS Vita), your favourite TV shows, favourite musical...

UPDATE: A Little Something More

A new scan is making its way around the internet and boy, is it worth seeing. Japanese magazine V-Jump has leaked this scan of the next Kingdom Hearts game. I'm at a loss for what it might mean; but it's still fun to look at and fantasize about. Hopefully, TGS 2007 will loosen the lips of our favorite game company......

Disney fans can breath easy, as King Mickey's journey is only beginning. The world's most famous mouse is going to get extra love and support from the creative minds behind the Kingdom Hearts universe. But not, as Tetsuya Nomura has insisted repeatedly, in the form of a sequel. Nope, this entry will be spin-off and while the subject of the...