Long long ago there was a goddess. She cherished all life and transformed herself into a Mana Tree to watch over the world. Thus the legend began.

As time passed, memory of the goddess faded from peoples hearts. One day a man crept into the sanctuary where the Mana Tree slumbered. With the power of Mana he built a great civilization. But this marked the dawn of a terrible age of darkness. The man forced the world to kneel to his will. His name was Vandole.

When souls were trapped in the darkness of despair, a glimmer of hope shone in the hearts of a few brave youths. The fight was fierce, but they would not give up. One wielded a holy blade that gleamed as brightly as the hope of their hearts. Powerless before the light, the darkness was vanquished.

The power of Mana was reclaimed from human hands and restored to its rightful place. But now, the people have forgotten the goddess once again... 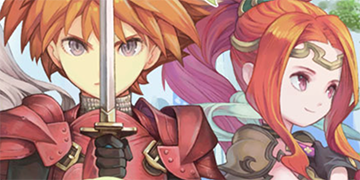 Sword of Mana Renamed and Remade

Sword of Mana released in Europe

Square Enix's GameBoy Advance RPG, Sword of Mana, the latest instalment in the celebrated has finally been released on the European market. The game has already been released in Japan and North America where it has become quite popular.

Square Enix Europe has announced that their latest Game Boy Advance title, Sword of Mana will be released in Europe on March the 18th 2004. The game has already been released in Japan (where it sold over 500,000 copies) and North America.