Boss Guide When Playing As Heroine

This guide will give you tips on how to defeat the bosses that you'll encounter during Sword of Mana when playing as the Heroine.

Any weapon will do when fighting this boss although magic will not do much damage. Be careful when he uses his powerful multi-hit projectile attack.

This boss can be a little tougher than the previous ones if you have not levelled up. Using the bow will not do any damage so you must use your sword (combine with PowerUP to deal more damage), this means that you have to get close to attack. "Wisp" attack spell will deal a lot of damage but watch out as he can counter magic attacks.

The battle can be a bit tricky as it's hard to reach the different parts of the boss. The blue head attacks with poison and freeze attacks that can be troublesome. The best way to fight it is to stay on the cliff and use a combination of the Salamander spirit attacks and your bow or flail (combine with PowerUP to deal more damage when using physical attacks).

This boss is relatively simple to beat but keep in mind that your weapons are useless against this boss so the best is to use magic. You can also switch to Bogard and use his sword as it deals a decent amount of damage.

This boss can be though at first but its not that hard once you get the hang of it. Just stay away from the bouncing lights she sends out and use your sword to attack the head. Remember to heal if your HP runs low.

This boss is not as hard as it may seem, just stay away from the blue balls he throws at you and hit him with your sword when he stops.

Just hit it like crazy with your sword and it will be over before you can say "I love square insider!".

This boss can seem tough but its actually really easy. Firs kill off the bottom part hitting it a few times with your sword. The top part will shoot blue projectiles at you but just use your sword as a baseball bat and hit them right back where they belong.

This boss is quite easy. The best way to kill it is to shoot at it while it flies by, just stay away from the bombs he drops on you.

Another easy battle, just stay behind him and use your sword or lance to attack him.

The boss can be though if you are not prepared. Try to stay away from all the magic attacks she can throw at you. The weapon of choice is the Lance as its fast and has a good attacking range.

Again, the weapon of choice is the Lance as this boss is strong against all blade weapons. He's also weak against Salamander magic attacks.

This is one of the hardest boss fights so far it also important to watch where you walk as the lava can damage you. Undine magic is effective if you've been levelling it up.

Any weapon works fine on Lich, so use whichever one you've levelled up themost. If you want to use magic then keep in mind that Wisp is the only magic that can do any damage.

Run like crazy to avoid the orbs that he throws at you. Long rage weapons will deal no damage so there are to ways of defeating him one is to switch to Mashall and use him but you can also use Luna (best choice if you have a high magic level).

Long-range weapons are useless against Demagon, but any of the other weapons are fine. As for magic, Luna and Gnome do the most damage.

Julius's first form isn't too hard just watch out for the Ox that he summons periodically. Any weapon and magic will work against this boss.

Julius's second form has more HP than his first, but he still isn't tootough. Use the weapon that deals the most damage as magic is not as effective.

Julius's last form is the hardest, with more HP than the two previous forms combined. Use the fastest weapons as he moved around a lot and remember to heal often. 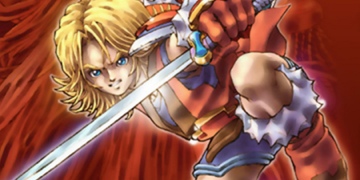 Boss Guide When Plaing As Hero

This guide will give you tips on how to defeat the bosses that you'll encounter during Sword of Mana when playing as the Hero. 01 Jackal (HP: 55) This boss should be very easy to beat. Hold in the B button to outrun him and hit him in the back with your sword. Watch out when he heads for the...