Blood of Bahamut Gets A Release Date

Square Enix has announced that the official Japanese release date of Blood of Bahamut for the Nintendo DS will be on August 6.

The game is set in a city built on the back of a great beast known as a Gigant. The city suddenly comes under attack and protagonists Ibuki and Yui must defend it as well as other cities that were built on Gigants that are awakening. The game also allows up to four players to battle giant beasts together.

Sounds interesting. I sometimes forget that I have a ds..but this might make me remember it haha. 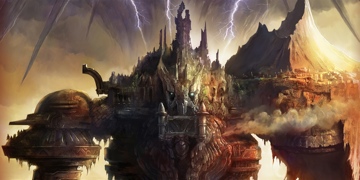 It has been two days since Square Enix opened a new teaser/countdown site for a game called Blood of Bahamut. Some scans from the latest issue of the monthly Jump Magazine have now confirmed that the title will be a Nintendo DS game. Check out the first scans here:

Square Enix has opened a new website featuring a picture of some giant creature (probably Bahamut although it kinda looks like Alexander from FFIX) and a countdown that will end in about 5 days. Could it be a sequel to Bahamut Lagoon that got released on the Super Nintendo in Japan in 1996? Who knows ... all we can do...