Square Enix opened its splash page for the to-be-announced Romancing Saga: Ministrel Song. Although there isn't much in it for its visitors, you are provided a short 16 second TVCF, which also comes in Male and Female version.

Romancing SaGa is a sub series of the main stream, SaGa series, which have been gathering its fans since the days of SNES. As Gpara interview with Akitoshi Kawazu revealed its subtle sign of return, the official announcement of the game is yet to come in this years Tokyo Game Show.

That's not too long, Tokyo Game Show 2004 is just a week away. The official site should launch sometime during next week, targetted to attract interest for the big event. Romancing SaGa: Ministrel Song @ TGS 2004 will feature movie footages and playable demos :D

Now now... Weekly Shonen Jump's coverage on Minstrel Song reveals that there's eight main characters to choose from. For what the SaGa series is famous for, the "Free Scenario" system is going to at the heart of Minstrel Song. The system allows for its players to make decisions. The decisions you make will affect the whole story.

Romancing SaGa: Minstrel Song is due to be released in Spring 2005 in Japan! 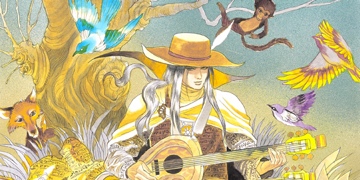 Romancing SaGa: Minstrel's Song was first released in 1992 for the SNES and was made exclusive to onry Japan. Ten years after, Square Enix decided to create a remake for the PlayStation2 with complete upgrades to every aspect of the game. Many are reluctant to try Romancing SaGa after the game maker's previous SaGa title, Unlimited SaGa which sold fairly...

Square Enix announced the release date for Romancing SaGa. The role-playing game is expected to be welcomed to the shores of North America on Septemeber 1st, 2005. Romancing SaGa is rated T for Teen by ESRB. As of yet, no retail price has been announced.