Dirge of a Series

An interesting romp through unfamiliar locales that ultimately fails to deliver what fans were expecting, in the omnipresent shadow of its predecessor.

Welcome to Dirge of Cerberus, the PlayStation 2 debut of gun-totting Vincent’s back story. Set a year after the events of Final Fantasy VII: Advent Children, and thusly three years after the original PlayStation installment, Dirge of Cerberus actively explores the character of Vincent Valentine. As players learn more about the former Shin Ra Turk and the elite army known as Deepground, Square Enix takes a decisively inventive approach to this Action-RPG spin off.

The game play that binds Dirge of Cerberus into a singular, cohesive piece, is unlike anything to have graced the franchise before. As a gun wielding Vincent, players set off about the world, fighting the Deepground Soldiers. There are a myriad of problems that present themselves immediately; Vincent can hardly do anything in the beautifully constructed environments through which he tears. Unlike the similar battle elements in Kingdom Hearts, Vincent cannot jump across roves, he cannot explore secluded locales, and indeed he can only go where the road lets him. When it comes down to it, the jump function becomes unnecessary and pointless.

Beyond the very lack of exploration within Dirge, a major strength is the refined and particular gun development system. Well thought out and properly executed, the guns within Dirge make rolling through the rock-dumb AI an enjoyable waste of time. The modest implementation of magic reminisces of the Materia system of Final Fantasy VII, but at the end of the day that’s all it really does. In fact, Dirge so heavily leans upon the gun developments to sustain itself, that the only magic I found myself continually using was fire.

A major complaint that has been lodged by other reviewers that I shall repeat his the mass linearity of the game. Call me old fashioned, but a forked path where one leads in a straight line to a dead end and the other leads to progression doesn’t do much for the environment. Arguably the game’s most “city” like environment, Kalm, is nothing but a zigzagging line. A place where Vincent must grab a card key, have a cut scene, face a boss, end the fight with moves the player can’t duplicate, to be rewarded with some dénouement that only pales next to everything the main franchise has pulled out. Sadly, the “Rinse and Repeat,” style of the game play ensures that Dirge packs as few punches as possible.

I’ve come off sounding negative; but let me back track and say that Dirge follows a sturdy formula that, if it were any other game, would be more than acceptable. But slap that Final Fantasy on and there’s a whole new level of criticism to face. Dirge employs strong, if uneventful, game play to get the player from one point to another.

Besides the FMVs within Dirge, the in game graphics are entirely unconvincing. Way too much blue glow—courtesy of the WRO and the DG Soldiers—distracts (or adds to) the blandness and repetitiveness of the game as a whole. Cut scenes are done well, with facial expressions being well executed and even comedic in a few places.

As always it goes without saying that Dirge of Cerberus, by mere association with the name Square Enix, has beautifully engineered FMVs that, as with a majority of the game, leave us longing for more of the visual beauty that fails to cross over into the game. Renderings of airships and Midgar leave players dangerously hungering to dust off VII and go for another crazy ride.

Composed by Masashi Hamauzu, the Original Soundtrack to Dirge of Cerberus is a cross of jazzy and outgoing themes with dark and melodious nocturnes. Hamauzu, who will be providing the OST to XIII, definitely proved his abilities with Dirge of Cerberus, jumping from piano, to drums, to orchestral finales. Strong character themes and event music add to the remarkable talent of Hamauzu. The only thing he seems to have trouble with—an area where his predecessor the legendary Nobuo Uematsu excelled—is with particular area music. Hamauzu has problems distinguishing music from one area to the next.

Even so, particular tracks such as “Lucrecia Crescent,” and “Hope for the Future,” bear the need for particular mentioning.

Can you say shameless reenactment of late-story elements from Final Fantasy VII? I sure as hell can. Dirge’s convoluted story emphasizes everything from hitherto unmentioned WEAPONs, fleets of airships, elite armies, and minor deities set the stage for a story in a world that I find myself less attached to with every passing sequel. New details behind Vincent emerge, but nothing that we didn’t really know already. Poorly developed characters and even lower quality motives mar the game with questions of “Why?” over and over again.

Besides, if Sephiroth couldn’t destroy the Planet, what makes Deepground think they have a chance?

I’m not going to explain the story in the least, because even as poorly conceived as it is, it still retains potent interest to any fan boy who wants to know what happens next. At the same time, we can only hope that Dirge of Cerberus sets the stage for the end of the coldly received Compilation of Final Fantasy VII.

Dirge of Cerberus offers an interesting weekend reprieve from studying for a test or something; but it is not worth the sixty dollar price tag. Rent, beat, return it and move on; or resell it to the nearest game shop and apply the credits towards some other game. 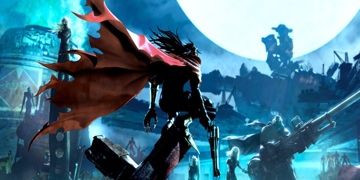