When Type-0’s localization was finally announced at last year’s E3, gamers in the western hemisphere breathed a sigh of relief. Hajime Tabata’s second outing on the PSP would finally be reaching avid fans via an official release on the PS4 and X1.

For gamers desperately searching for a sign that the Final Fantasy series is, at long last, correcting its course after years of near-hits and heart-breaking misses, Type-0 HD is the first significant step in the series’ return to form.

The Story of Orience

Set in the world of Orience, whose four civilizations are guided by the lights of their respective crystals, Final Fantasy Type-0 HD is—at first glance—a game about the aggressive warmongering of the Militesi Empire. Led by Cid Aulstyne, the empire is attempting to unite the crystals of Orience under its flag but, in an unexpectedly successful counter-operation, the Dominion of Rubrum’s Class Zero (our fourteen heroes) expels the empire from their home base of Akademia. Class Zero believes that this might be their chance to become Agito, the prophesied savior of Orience who will appear during the end of times known as Tempus Finis.

When Nine and Nine meet Nine, the depths of reason shall stir. When the seal of creation is broken, a voice like thunder shall sound, and thou shalt know - We have arrived.

It continues to bother me that Type-0 HD requires being played through at least twice in order to unfurl the entire narrative. Type-0 HD has one of the most imaginative plots in recent time but bungled the delivery. Even Lightning Return's story, messy though it was, could be absorbed in one play-through. Type-0 HD mishandled the execution of its own story and, as reviewers otherwise have noted, this is the game's single gravest error.

With fourteen cadets to choose from, Type-0 HD offers the largest roster of playable characters in years. Each cadet wields an interesting weapon and, with a few sparing exceptions (read as: Deuce and Jack) each character is a lot of fun to play. Type-0 HD rewards your favorite characters by making powerful weapons and helpful accessories available as you achieve certain kill-counts or specially-timed executions called "Killsight" during battle.

And while other outlets panned the Real-Time-Strategy scenarios that can be played before certain missions on the world map, I found them to be a lot of fun. Are these instances as advanced as StarCraft II? Of course not, they're meant to be an experimentation in varied gameplay; a fun way to make new towns, shops, and tasks available. Otherwise, the sky is the limit with Type-0 HD's staggering content with a multitude of optional dungeons, missions, and tasks to accomplish which cumulatively make Orience one of the most traditional Final Fantasy worlds in years.

What holds Type-0 HD back are the hold-overs of its prior incarnation as PSP game. Repetitive town designs, a fussy camera, and a heavily segmented world map (for loading reasons) keep this game from achieving the same fluid finish as Lightning Returns or even a PS1 Final Fantasy title. But keeping in mind that Type-0 HD is a port, it's tough to fault this otherwise solid outing. With varied gameplay and lots of extras to occupy your time in Orience, Type-0 HD comes the closest to the golden age of Final Fantasy than any of the more recent main series titles.

The Sounds of Tempus Finis

Type-0 HD is also notable for the triumphant return of composer Takeharu Ishimoto to Final Fantasy. He's busied himself with a lot of other projects since 2007’s Crisis Core: Final Fantasy VII (on which he also worked with Tabata) so it's still quite fitting that the soundtrack for Final Fantasy Type-0 HD is truly something special.

March forth, White Warriors! End the legacy of the Old Gods, So that you might usher in a new world! - English translation of "The Beginning of the End"

“The Beginning of the End” is as audibly iconic as "Fithos Lusec Wecos Vinosec" and has become synonymous with Type-0 HD. Rarely has a Final Fantasy track ascended to such dramatic and gripping heights as this but Ishimoto has pulled it off with reverberating talent. Hajime Tabata even named it as his favorite track overall, though I would hasten to disagree and say that "Tempus Finis" or "Vermilion Fire" are my favorites but "Type Zero" deserves a special mention as exceeding Lightning Returns' "Light Eternal" as my favorite ending theme from a Final Fantasy game.

The real treats for longtime fans will doubtless be the auditory nods to the Final Fantasy series and its rich history with tracks such as “Crystal Guide Us” and “Moglin” that reimagine many of our favorite themes. Ishimoto’s unquenchable passion for guitar, which was constant in Crisis Core, returns in Type-0 HD albeit with a commendable level of restraint.

Purchasers of the Collector’s Edition of Type-0 HD were treated a “composer’s selection” of Ishimito’s favorite tracks. Since then, the full Type-0 HD soundtrack has become available through numerous outlets including Square’s online store and iTunes. The full soundtrack ranks among the best that any Final Fantasy has to offer and is well worth the investment.

Final Fantasy Type-0 HD had a tremendous weight on its shoulders as it released worldwide. Not only did it include access to Final Fantasy XV: Episode Duscae, but it was the first Final Fantasy in years that promised to return beloved elements of the series (towns! world map! airship!) back to gamers. And it would prove to be a much more recent, and accurate, interaction with a product of Hajime Tabata and his development crew.

It accomplished so much that it’s easy to forgive Type 0 HD’s other shortcomings—namely how it mishandled an otherwise brilliant story—from thanks to engaging gameplay and beautiful music that create a definitively Final Fantasy experience.

*5/27/15 Update: Polished the review as a whole and added some new thoughts.

I have only played a few hours of it but I really like it. However I think that it would have been better as a PSVita remake (but I can understand why they chose not to do that).

I'm basically a console gamer so Type-0 HD was a dream come true for me. If they can keep the enhancements then I'm sure they'll port it over to Vita. I would recommend playing it through all the way at least once, the ending is the same regardless and it's one of the ballsiest moves Square Enix has ever made. 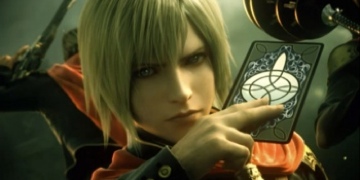