In hindsight, Kingsglaive was obviously expected to be Final Fantasy XV’s emergent multimedia universe darling. I would argue that position has been usurped by the consistently excellent anime Brotherhood. Whereas Brotherhood is quite good, Kingsglaive is just good enough.

This isn’t to say that Kingsglaive is bad. With stunning visuals and a gripping score, the foundation for an excellent movie is there but, until the last thirty minutes or so, Kingsglaive never manages to take to the battlefield.

Right from the start Kingsglaive has the unfair disadvantage of needing to make the audience like a generally dislikable group of characters. For Regis, Lunafreya, and Ardyn this isn’t much of a challenge. But for Nyx and the rest of his titular band of magic-wielding warriors, it’s a borderline impossibility.

Kingslaive: Final Fantasy XV illuminates the long-awaited fall of Insomnia, capital of the Kingdom of Lucis, to the malevolent Empire of Niflheim. It’s the very story that Square Enix initially told us about ten years ago, except this time it has a whole movie to itself, but Kingsglaive persistently behaves like a patchwork quilt of scenes and events that were shed from Final Fantasy Versus XIII when it became Final Fantasy XV. While that sounds really interesting, the execution is bogged down by poor voice acting and a barely coherent plot.

There’s still so much to like about Kingsglaive, though, and I generally did like it but it failed to live up to the lessons that Advent Children Complete learned long before it. So while I recommend seeing this movie, given that it'll need to keep you warm at night for the next 108 days, I do so with reservations. Sean Bean’s witty but doomed King Regis, Darin De Paul’s too-clever-for-the-rest-of-us Chancellor Izunia, and even Lena Heady’s naive but resolute Lunafreya are major boons to a spotty movie. Add to that the fact that Insomnia itself is as much of a character as the rest of the cast, a truly glittering fantastical city rooted in reality, that it’s fairly easy to forgive Kingsglaive for its broader shortcomings.

And now, for some epic spoiler-y thoughts: 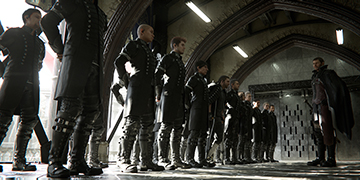 Kingsglaive: Final Fantasy XV, the CGI prequel film to Final Fantasy XV, will arrive in select theaters throughout the United States on August 19, 2016. It follows a month after the Japanese theatrical release on July 9, 2016 which means that anyone who wants to avoid spoilers should probably abandon the internet during the intervening period. In the United States,...