It’s been two years since the adventure that was Final Fantasy X. Together with her guardians, Lady Yuna defeated Sin once and for all, and brought about the Eternal Calm to Spira. The Aeons have finally been given a chance to rest, and Spira can finally be at peace. Yet, even with Sin gone, some things are still missing. That is, until a young thief re-appears with a sphere of a lost friend.

As the first game released under the SquareEnix banner, Final Fantasy X2 had more than it’s share of hype to live up to. Being the first direct sequel to an FF game, it both stays familiar to the formula while adding it’s own new tricks.

theSTORY. The story of FFX2 began a year after the release of FFX, when Square released a small movie called Final Fantasy X: The Eternal Clam. In it, Yuna is moving on with her life on Besaid Island, yet still thinking of her lost Guardian. Towards the end of the film, Rikku appears with a sphere containing grainy footage of what appears to be Tidus, trapped in some sort of dungeon. Without hesitation, Yuna decides to leave Besaid, and find out what exactly is happening.

In FFX2 we meet many new and old friends. Firstly, Yuna and Rikku have undergone quite a change. Now more scantily clad, and not bound by the strict life of a summoner and guardian, they are free to roam Spira. New additions to the cast include Paine, a brooding young lady with a tightly locked past. She joins the team of Yuna and Rikku to form Yu-Ri-Pa. Together with the help of Rikku’s sibling, Brother, his friend Buddy, and the info whiz kid ShinRa, they form the spherehunting troupe The Gullwings. But they aren't the only Spherehunters in Spira's skies, as for most of the game you’ll be fighting off rivals The LeBlanc Syndicate.

Along with the fall of Sin came a change in Spira’s beliefs. No longer is Yevon the "End All, Be All" mandate of Spira. New factions, such as the Youth League lead by their meyvn Nooj, or the Machine Faction headed by the Al Bhed Gippal, have begun to form their own beliefs and followings throughout Spira. And while not the dominate power it once was, New Yevon, headed by the young Baralai, still hold a considerable amount of power and secrecy over Spira.

theLOOK. Being a direct sequel to FFX, the graphic style of the game is for the most part the same, which is a good thing. The visuals are enhanced a bit, especially the facial animations. The world of Spira is back in all it’s beauty, with a few new looks here and there. The once demolished Island of Kilika is now a bustling village, the Youth League and Machine Faction HQ’s are detailed campgrounds of formerly empty FFX locations. Everything that was seen in FFX can once again be visited and looks twice as good, not to mention the new areas added to the game such as the Floating Ruins and the Farplane. Sadly, the FMV’s for the game are not nearly as numerous this time around, but definitely worth the price of admission.

thePLAY. Final Fantasy X2 feels both similar and completely different from its predecessor. The story this time is broken into Five Non-Linear Chapters, Meaning you can basically pick and choose your path through the story, that no playthru will ever be exactly the same. Another interesting new mechanic is the Completion Percentage. Each part of the game adds to your total completion of the game, and the higher your completion percentage, the better ending you will receive.

The biggest and most noticeable change is of course it’s battle system. Gone are the days of the CTB, as FFX-2 uses an enhanced version of the traditional ATB system, and adds the new Dress Sphere system. Throughout the game, you can collect various Dress Spheres, such as Samurai, Trainer, Gun Mage, Mascot, and many more that hold new abilities and techniques to use in battle. Placing the Dress Spheres onto the Garment Grids enables you to choose exactly which type of warrior you want to be. Three special Dress Spheres, One each for Yuna, Rikku, and Paine, that hold devastating powers and techniques specific to each character can also be picked up. Think of these spheres as the Overdrives of FFX-2. The Sphere Grid system of Leveling up has also been abandoned for a more traditional EXP/AP Point Level Up System, similar to the system used in FFIX.

theSOUND. Musically, FFX-2 just does not live up to its predecessor. With Nobuo Uematsu focusing on other projects, the game’s soundtrack was co-created by Noriko Matsueda and Takahito Eguchi. As a whole, the soundtrack for the various locations in the game seem unfitting or incomplete. There are a few bright spots. and the game's two vocal pieces, “realEMOTION” and “1000 Words” are fun little additions. Unfortunately, outside of Japan, you'll get cover versions of the song, as SQEX decided to localize the music instead of using original performer Koda Kumi.

theEND. While not perfect, Final Fantasy X2 is still an experience, and the perfect way to complete the FFX Story. Seeing Spira transform after the defeat of Sin is quite the sight and watching the struggles of Yuna, Rikku, and Paine to uncover the truth as well as their own pasts make for a nice tale. The new play mechanics add a little something ne, and the enhanced battle system of FFX-2 may be the best Battle System yet in a Final Fantasy game. If you were a fan of FFX, this is definitely a game you need to play. 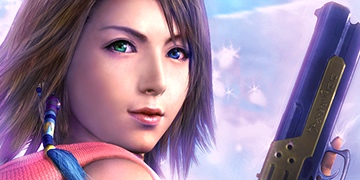