It’s been 3 long years since Crisis Core, the prequel to Final Fantasy VII, was announced at E3 2004. Since I’m a nerd with almost no life to speak of, I did the unspeakable.But ways & means is not the point of this roughly penned import review. Long story short: it's a masterpiece.

Crisis Core’s gameplay is relative simple. When on missions, Zack moves around a level with the analog or D-pad. Zack’s battle commands only happen during what are (Still) random battles. There’s no shimmering screen, the enemies just appear as a robotic female voice declares a battle. Using the L and R triggers on the PSP, and then confirming with the O button, you can issue Zack an order to either attack, use materia, items in Zack’s inventory. You can also move Zack around in battle, and the key to this game—no joke—is to hit the bad guys from behind. Hitting them in the back means a critical strike, which means double the damage. Finish the bad guys off, the battle menu disappears, the nice lady says the conflict has been resolved, and you move on. Formulaic, perhaps even a little boring, but Crisis Core’s fast paced and periodically changing difficulty level keep the title addicting. But don’t let your guard down—Crisis Core will take you by surprise if you underestimate it, and you can kick it fast if fail to check your HP regularly.

The materia system makes me happy. Oh so happy. Zack has lots that do different things so it’s awesome to watch Zack jump into the air and crash down on the bad guy or spout out some thunder. There are also the classic FFVII summon monsters in Crisis Core, but you must defeat them in the game and in missions to acquire them. The summons are only accessible through random slot gizmo called the Digital Mind Wave. The DMW is 3 spinning reels, which land on character faces. In battle the DMW is liable to hand out buffs to Zack, and restore HP, MP (points necessary for magic materia), or SP (the points necessary for Zack to use physical materia). There are instances when the DMW takes over the screen and, with any luck, lands the same three faces of a character. This enables a special attack by Zack, and from what I gather, the three faces determine the type of attack. Landing on Sephiroth sends Zack into a crazy blitz that Sephiroth demonstrates early in the game. Landing on Angeal initiates hand combat. Anyways, half the fun of the DMW is watching the unique attacks so I’ll let you find out the rest on your own. As for the summons, they interrupt the DMW screen every so often. If you land all three wheels on a summon like Ifrit or Bahamut, you use the summon.

I have only a few complaints to lodge and mostly lies with level design. The majority are adequately large and sprinkled with chests. It’s just that nearly every level and mission area is composed of narrow ledges or paths. Thusly, when the player happens upon an intersection, a turn, or a part of the path that’s just wider than the rest, it’s easy to predict that an encounter will occur. Crisis Core takes the good with the bad, but it clearly heaps the good on top of the bad in large quantities. This game is fun, addicting, and beautiful in so many ways.

So now we come to the part of the review where I get into graphics, and all that mumbo jumbo. Honestly, though, I have no experience with the PSP or any of its games, so I have no frame of reference beyond another handheld, the DS, and what Crisis Core has produced thus far has put my DS to shame. There’s something oddly gratifying about running around as Zack and mercilessly smashing into enemies, seeing events and scenes from FFVII redone, and then watching cut scenes that rival the best of the PS1 and PS2 games on my PSP.

Then there’s seeing the SOLDIERS like Zack and Angeal, who both have crazy blue Mako eyes. It’s the weird, nit-picky things like seeing this, the Shinra Lobby, a model of No. 26 rocket, running around Wutai, and such that satisfy the FFVII fanboy cravings. Not to mention, all of the summons get an FMV intro/attack sequence, as opposed to the traditional in-game attack sequence in the history of the series. Watching Ifrit tear it up made me giddy. Really.

Crisis Core’s FMV sequences have me drooling. Even if you’ve seen the intro on Youtube, it’s still doing a great amount of injustice to watching such high quality on a wide screen in your hands. Whether it’s in game, FMV, or just staring at the box, Crisis Core delivers and makes it an unavoidable purchase for your PSP.

Yeah, it’s awesome. From Crisis Core’s Theme to its many incarnations, in addition to the remixed tracks like One Winged Angel or Those Who Fight Further, Crisis Core is an experience. Much of Crisis Core is a guitar based, metallic sound that echoes Zack and the whole SOLDIER persona, interspersed with moments of serious and delightfully dramatic music.

Genesis, SOLDIER 1st Class, disappeared in Wutai. Shinra sent Zack and his tutor Angeal after him. As the game progresses, everything begins slipping away. Genesis and Angeal become convinced that they’re monsters, and in the process Sephiroth embarks on the path to what becomes the conflict of Final Fantasy VII. There’s a clash in Crisis Core of what makes a person a monster—how they’re born or how they act? Zack spends the game maturing and developing relationships with Cloud and Aerith that ultimately climax exactly as we know it must, adding to the bitter sweet, and deeply emotional, ending of the game.

Crisis Core is a success of a game in every way. Hopefully it will spark renewed faith in the Compilation project, and perhaps even give Square a sense of how much fans want a remake? Oh well, only time will tell, but I hope this review gets you jazzed for Crisis Core –Final Fantasy VII- 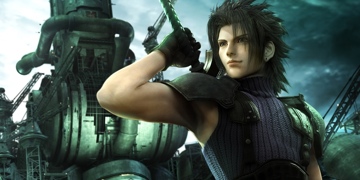 A burst of Square Enix news has preceded their otherwise quiet Spring schedule and, along with that, have come a few unexpected surprises. For the most dedicated fans of the Final Fantasy series, Square Enix and strategy guide partner Prima have teamed up to release a special box set of guides for Final Fantasy VII, Final Fantasy VIII, and Final...