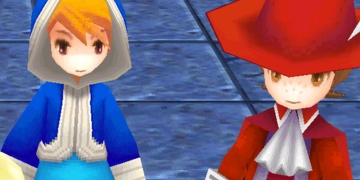 Square Enix has revealed that Final Fantasy III is coming to PC via Steam. The game will be a port of the Nintendo DS version released in back in 2006 which has been optimised for PC gaming with new and improved 3D visuals and story sequences. It will also include Steam Trading Cards and Achievements and new visual designs for...

With the tremendously popular remake of Final Fantasy III a financial success in both Japan and the United States, Square Enix is beginning the media blitz that precedes most of the company’s major releases. Enjoy the sparse sequences from Final Fantasy III’s opening FMV sequence. You can view the video here.

Final Fantasy III Releasing in May

Final Fantasy III, the "lost" installment of the franchise, is set to make its debut across Europe on May 4th, 2007. Featuring original art by Yoshitaka Amano, character designs by Akihiko Yoshida, with a revamped score initially composed by Nobuo Uematsu, Final Fantasy III promises to be worth the 17 year long wait. Final Fantasy III was released in Japan...

Even though Final Fantasy III released almost three months ago in North America, fans of the recreated entry have more to clamor about: Trading Arts Final Fantasy III Minis. Already out in Japan, the Minis will soon debut in May of this year, and the standard Japanese prices for a full set of twelve will most likely translate across the...

If You've Got Some to Spare...

If you* aren't still recovering from Final Fantasy XII CE, then head on out and get yourself a copy of Final Fantasy III DS. For those of us without money, or a Nintendo DS, we'll sit over here in our corner and grumble about how we prefer Final Fantasy XII anyways... This all new game sports too many features to...

Well, after reigning supreme in both numbers and popularity, the NDS revamp of Final Fantasy III slipped to number eight on the Japanese game charts, tallying out at an incredible 781,713. With numbers that give major console games a run for their money, Final Fantasy III is a bonefide success, and hopefully it'll carry over to the United States release,...

In its first week of sales in Japan, the Nintendo DS revamp of Final Fantasy III sold 503,051 units, an estimated 91% of the initial shipment. In its second week of sales, the new release sold 45,949 copies; numbers that will undoubtedly inspire high hopes for the North American and European release of the game. Nobuo Uematsu, famed veteran FF...

Square Enix has announced that the Nintendo DS remake of Final Fantasy III will be hitting US shores on November 14, 2006. Featuring a dynamic job-changing system and full touch-screen capabilities, the only Final Fantasy game for the DS yet to be released in North America should becone a hit.

Gameplay information for the upcoming Nintendo DS re-release of Final Fantasy III have been leaked. A new feature called the Defense Meter will play a large part in the game's battle system, possibly even having a greater importance than a character's HP. An attack from the character on enemies will result in depletion of the Defense Meter, and once it...

Square Enix recently released the first details regarding the newly announced Nintendo DS remake of its Famicom (Nintendo) classic Final Fantasy III. The game's look will be comparable to the visuals of Final Fantasy I and II's Game Boy Advance versions. The DS' upper screen will display the actual game, while the lower touch-enabled screen will show the game's maps....

Nintendo held a conference today that was devoted to to their upcoming portable console, the Nintendo DS. Square Enix took advantage of this scenario by announcing that it would be releasing a remake of Final Fantasy III on the console. This is the only Final Fantasy title that has not been remade by the company. There were talks in the...