Lara Croft’s presence in the gaming industry could be called ubiquitous, to say the very least of a character that has been a staple of the gaming experience since 1996. Lara Croft has played a key role in the birth of the action-adventure genre, has spanned four generations of hardware, all in more than 9 games that have collectively sold over 35 million copies. The Tomb Raider franchise’s more recent struggles adjusting to modern times, new technology, and fierce competition have put the aging franchise on the defensive. Lara Croft desperately needed a new start. A redefinition. A reboot.

That's where TOMB RAIDER comes in.

In an era where Nathan Drake and Master Chief were more recognizable than Lara Croft, could they make Tomb Raider relevant again?

Tomb Raider’s development history is as rich and storied as Lara Croft herself. Initially conceived and developed by Core Design, which was later acquired by Eidos, the first Tomb Raider became blockbuster titles for PlayStation, Dreamcast, and PC—but it was Core Design’s eventual exclusivity agreement with Sony that would make Lara Croft nearly synonymous with their fledgling platform. When 2003’s Tomb Raider: The Angel of Darkness failed to attain either critical or commercial success, Eidos tasked Crystal Dynamics with developing the franchise from then onwards. Crystal Dynamics bravely carried the creative torch and their efforts were rewarded when Tomb Raider: Legend sold over 4 million units but Lara’s popularity once again cooled when Tomb Raider: Underworld sold fewer than 2 million units in its first year.

Tomb Raider: Underworld represented the end of an era for Lara Croft. Gone were her original developers, as Core Design would be sold off by Eidos, and long gone was the platform exclusivity that had made her instantly identifiable to a maturing segment of the market. Crystal Dynamics pondered their challenges, released Lara Croft and the Guardian of Light in the meantime, and rebooted the series in 2013’s TOMB RAIDER. In an era where Nathan Drake and Master Chief were more recognizable than Lara Croft, could they make Tomb Raider relevant again?

Crystal Dynamics believed that Lara Croft was ready for her comeback and they were right. In its first month following release Tomb Raider sold a whopping 3.5 million copies and, in the year since, has broken through 6 million total units sold.

Tomb Raider contents itself with rather violently reminding players that this is her origin story.

Tomb Raider dives into the action when Lara Croft’s research vessel, the Endurance, is swept ashore on the mythical island of Yamatai. Once ruled by a mysterious Sun Queen, Yamatai is now home to cultist bandits and ancient samurai warriors—all trapped upon the island by malevolently and seemingly intelligent storms. Lara’s trek across Yamatai to rejoin her friends and find some means of escape leads her into conflict with Matthias, the bandit leader and devoted priest to the Sun Queen, who has other plans for the survivors of the shipwreck.

Lara is a fledgling explorer and archaeologist so Tomb Raider contents itself with rather violently reminding players that this is her origin story. Lara must learn to use a bow, to climb walls, to fire guns, and to take lives. She isn’t darkly immune to the horrors of survival but rather intensely disturbed by it and yet becomes even more determined to escape the fates accorded to herself and her friends by Yamatai.

Most importantly, though, is that fact that this Lara Croft is extremely likable. Headstrong, intelligent, and brave—the Lara Croft of Tomb Raider is fiercely devoted to her friends, the only family she really has, as the story accomplishes the monolithic task of making players care about Lara and the people she unwittingly stranded on Yamatai.

Tomb Raider’s weakest spots tend to appear in combat, which is ironically also one of its strongest elements.

Tomb Raider takes a refreshing approach to the typical gameplay of the action-adventure genre in a number of inventive ways. Firstly, the maps through which Lara must navigate are sprawling and often packed with unique challenges, hidden treasures, and GPS caches that unlock bonus development content. As large as they are, the environments are gorgeously rendered with a stunning attention to detail. Within an hour of starting my play-through I was treated to the dangerous beauty of a mountain village burning to the ground; later in the game Lara goes leaping across a cliffside town as its collapses beneath her.

It’s not until fairly late in the game that each area becomes fully explorable. As Lara upgrades existing equipment and acquires new tools she is better able to scale walls, break down doors, and discover hidden locations. While the theme of the game is discovery and exploration, the actual raiding of tombs is given something of a secondary status to the main quest of the game. However, the tombs are often times intriguing enough to be challenging without crossing the line into frustration and their rewards enrich and deepen the lore of this new Tomb Raider universe.

Tomb Raider’s weakest spots tend to appear in combat, which is ironically also one of its strongest elements. Specifically, AI enemies are frequently clunky and sometimes infuriating but almost always obnoxiously armored. Depending on the difficulty level selected by the player, ammo can also become a major concern in what becomes a race for resource management and conservation. Crystal Dynamics wisely backed away from a “one size fits all” policy and allowed players to change the difficulty at their leisure. Nevertheless, Tomb Raider consistently struck a perfect balance between challenging and rewarding—hitting its stride often, both with confidence and ease.

Lara herself is imbued with new skills, both active and passive, by spending Survival Points that let her dodge more quickly or use a wider array of weapons during kill shots. It’s an interesting, if somewhat flat, dynamic that gives Lara a sense of progression even while the upgrade trees for her guns, bows, and axes are stealing the show.

Balance is the best word for the gameplay of Tomb Raider; from conception through development to release, Crystal Dynamics worked tirelessly to achieve the perfect balance of combat, advancement, and environment to create a stellar game.

Yet, Graves balances the bombastic notes of his score with tracks of quiet reflection since Tomb Raider is, after all, the story of Lara Croft’s growth into a figure of legend.

Mystery and adventure are prominently featured themes in Tomb Raider, so it fell to Jason Graves to compose a soundtrack that captured the sounds and music of the trials entombed within Yamatai. Graves hits his stride very early on with the game’s iconic main theme, “The Tomb Raider,” which serves as Lara Croft’s fanfare. Graves' unforgiving use of drums, chimes, and wind instruments captures the dangerous and airy peaks of Yamatai, as well as Lara’s burgeoning career.

While “The Tomb Raider” and “Adventure Found Me” are predominantly iterations of Lara’s theme, Graves sidesteps the challenge that often face composers in action-adventure genres: weak music during action and combat sequences. Tomb Raider’s intense combat, which is quite frequent, can be all-consuming but Graves succeeds at partnering Tomb Raider’s most entrancing gameplay sequences with equally absorbing auditory experiences. Particularly effective tracks were “A Call for Help” and “The Scavenger’s Camp” whose frenetic drums, symbols, and horns demand the listener’s attention.

Yet, Graves balances the bombastic notes of his score with tracks of quiet reflection since Tomb Raider is, after all, the story of Lara Croft’s growth into a figure of legend. “Exploring the Island” and “The Oni” richly expand the Asian-influenced sounds of Yamatai while simultaneously providing the slower moments necessary to develop the story.

“The Ritual” easily stands apart as, quite possibly, the best track to be heard in Tomb Raider. Without giving away too many plot details, it plays during the game’s climax when Lara Croft, finally coming into her own as a survivor and explorer, squares off against Yamatai’s most formidable villains. It daringly rearranges Lara’s theme into a frantic piece that summarizes the chaos that threatens to permanently engulf the island.

Crystal Dynamics has proven beyond a shadow of a doubt that Lara Croft still has a lot to offer. Tomb Raider might not take too many chances but the developers proved that there’s still no substitute to the careful balance of an engaging story, compellingly fun gameplay, and phenomenal music when it comes to creating an incredible gaming experience.

Got the game for free on PS+ and I'm really enjoying it so far. Looking forward to hearing more about the sequel that they're working on.

Best Tomb Raider game since the 1996 title. I loved every minute of it and I can't wait to get my hands on the sequel. 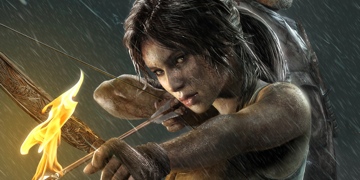